How to Eat Free Food in Dallas on Tuesday

Topics: deals, food, free, review
This article is part of my weeklong food blog series, "How to Eat Free Food in Dallas Every Day of the Week".
Tuesdays don't have many options for free food, but Frankie's Sports Bar & Grill covers the evening well in free pizza with the purchase of a drink. This freebie stands out from the others in a few ways…

1. Duration: As you can see in the photo, the written hours for free pizza are every Tuesday from 5pm-10pm. Most free food offers are only during happy hour or by special reservation only, so this deal at Frankie's is pretty wide open for you to pop in unannounced for happy hour, dinner, or a late snack. It's free for everyone, so bring lots of friends!
2. Quantity: We were served wide pie slices of what seems like unlimited free pizza, although that's not officially written anywhere. Our bartender gave my friend and I two plates each of free pizza, and I suspect if I had asked for a third round she would have obliged. Also, my friend ordered a soda and I a well drink, and that was it. It wasn't a 1-for-1 drink-for-pizza deal. We slowly sipped our one drink while we enjoyed two rounds of pizza!
But as with any good deal, there are some drawbacks: 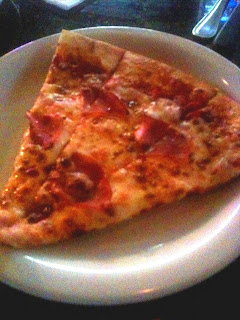 1. Selection: You don't get to pick which flavors you eat for free, and with each new round you will probably get a different flavor of pizza. I told the waitress I don't like mushrooms, so I would love if she could pick one without mushrooms. Her response was that she doesn't get to tell the cooks which flavors to make, they just make different ones all night long. With the luck of the draw we got pepperoni pizza first and ham second. Vegetarians, you probably don't want to risk this freebie.
2. Offer is subject to change: The very first time I ever went to this deal (or to Frankie's for that matter) was about a year ago, and that night there just happened to be some sort of important sports game on TV at 7PM. Frankie's is a sports bar, after all, so they were expecting a crowd and had posted signs on the door that free pizza would end when the game started at 7PM. My group of six got there at 6:30. It was hard to find a table, the kitchen was backed up, and the waitress was too overworked to get our group enough free pizza to equate one free slice each before the offer ended. It wasn't a great first impression.
3. The pizza: It's not bad, but it's not awesome, and thus I continue my search for “real pizza” in Dallas.
Email ThisBlogThis!Share to TwitterShare to FacebookShare to Pinterest