The Rigging of "Best of" Food Contests

Topics: food, food news, unflattering
Is it right that a restaurant is bribing fans to vote for them in Dallas Morning News' "Best Burger in Dallas-Ft. Worth" contest? Check out Mooyah's Facebook Page timeline-highlighted, full-width post from April 4:

The bribe worked. They're in the final round of voting right now. And for that, they upped the ante for fans to vote for their burger with this offer to win dinner for 10 people, posted on their Facebook Page yesterday AND today: 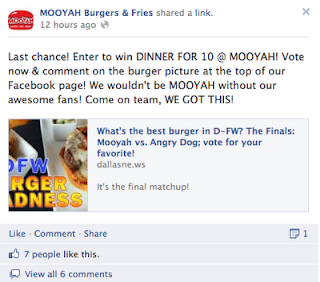 They've also made SIXTEEN Facebook posts asking for votes since the contest started on March 28, which was exactly sixteen days ago. That's an average of 1 post every day, although they skipped some days and posted about the contest twice on other days.

Asking and bribing fans to vote may not be against Dallas Morning News' (DMN) contest rules, but running any sort of contest on your Facebook Page Wall—such as how Mooyah asked people to share or comment to win free food—is definitely a violation of the Facebook Pages Terms (see section E. "Promotions").

Check out my followers' reactions to the two finalists in DMN's Best Burger in DFW contest: 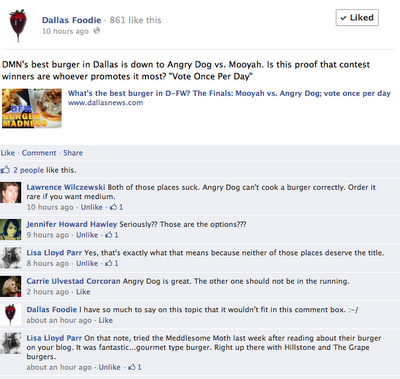 On Twitter, @ECSteeleTX tweeted, "@Dallas_Foodie its a crime this isn't between Maple and Motor / Lakewood Landing #burger #Dallas #recount"

And props to @lucky_topher for pointing out, "@Dallas_Foodie Pretty much. Check Mooyah's April 4th Facebook post - Give free burger to all who share their "please vote" link..."

As a social media marketer, I've observed that the repeated asking/bribing of fans to vote once every day in publications' "Best of" food contests is very much in the best interest of both the restaurant and the publication running the contest. The more people who click, share, like, tweet, comment, and vote, the more publicity, search engine rankings, and sales they all get. They need all of these benefits more than readers need a fair winner. This is probably the main reason why these publications allow one vote per person per day, and heavily advertise it as such.

I'd counter-argue that a business might annoy and lose some Facebook Likers with sixteen spammy "vote for us" posts, but the affect of winning a big food contest far outweighs the temporarily-annoyed fans. The winning restaurant gets to advertise their "Best of Dallas" moniker for forever. Next year may have a different winner, but many businesses display their winning sticker or plaque indefinitely, proudly proclaiming they were, for example, "Best of D magazine 2009" for all of eternity.
And they should! I've noticed that many people decide where to eat in Dallas based on whatever award was won in Dallas Morning News, D magazine, or Dallas Observer. In my early foodie days, I was one of these people! I've since learned that these winning businesses are often NOT the best of whatever they won; they were just the best at marketing that contest to get their fans to vote for them. Yet when the contest hoopla settles, many people don't think of food awards this way.
To vote, or not to vote?
Now, there's some food for thought. Let me know what you think in the comments.
Email ThisBlogThis!Share to TwitterShare to FacebookShare to Pinterest